Like any good feminist, I’m always on the lookout for art, media, or books that portray women fairly.

I’ve had the good fortune to talk to three women who–I think–utterly exemplify responsible representations of women, in art and in comics.

These three women will be at the Wildcat Comic Con, and I’m excited to meet them.

They are Joan Hilty, Tracy White, and ‘yuumei.

Of course, there are tons of other female creators, and tons of other comics that are fair to women, but these three women will be at WCC and these Weeks to Geek posts are part of a publicity effort, and I want you to get interested and come check out the goods, okay?.

I’ve been thinking about feminism a lot with regard to the romance fiction I read for money; there are some anti-feminist tropes that women writers of it self-impose.  I wrote another time about ridiculous sex tropes in romance writing. The anti-feminist tropes are similarly ridiculous, and instead of being just silly, they’re also offensive and potentially dangerous.

I am barred from using actual quotations from romance novels that I’ve edited because, well, it’d be irresponsible and unprofessional of me to do that as a professional editor, but here’s what I mean:

Romance novels reinforce flawed thinking about gender.  They are typically full of generalizations like, “Women cry all the time, and that is bad,”  and “Women are incapable of thinking rationally” and “All women love pink! And thongs!” and “Women should stop providing for themselves emotionally, physically, spiritually the moment they get a man.”

These generalizations are further typified by representations of women characters who are 100% capable of doing stuff for themselves, but the very moment some (of course) very sensitive and (of course) very attuned to his partner’s needs and (of course) emotionally or physically scarred, and (of course) well-muscled but possessing a heart of gold man shows up and sweeps a sassy, brassy sister off her feet… Well,  game over.

This is so much the case that feminist thinking is often parodied in romance fiction: the heroine begins the novel as a feminist, but the moment Superman arrives on the scene, she sees the error of her ways and realizes she’s just like–and pleased to be–all those other ninny girls who’ve given up the ghosts of their self-sufficiency for love.  You know, the ones she made fun of earlier in the book, who smiled and tut-tutted and said, “Someday your prince will come.”

Comics that are Better

Joan Hilty is a professional comics editor, book packager, teacher, and all-around graphic text maven.  She draws this comic called Bitter Girl.  This is a traditional, comic strip comic, but go click through the archives a little.  The characters are regular women with regular lives.  They wear regular clothes, have regular hairdos.

And yes, I get that it’s fiction and as such does not have to follow the rules of reality, but if you want a primer on how it’s so refreshing to see a comic that has regular women in it, go check out Dr. Nerdlove’s Post on Male Privilege.  And then read a brilliant, illustrative comic.

And there’re really piles of fair-to-women web comics, but Fella and I watched the Robert Downey Jr. & Gwyneth Paltrow  Ironman the other night, and I was struck again about how the traditional, comic, superhero thing is really not fair to women.   There’s Pepper, smart, but un-armed, sent into the lion’s den in a pencil skirt and stiletto heels with only her wits to protect her, and then only potent insofar as she enables Tony Stark to reclaim his power, health, and virility.

Sure, she turns down his sexual advances at the end, but I bet they’re throwing rice by the end of Iron Man II.  If you’ve seen it, don’t tell me.  We’re watching it this weekend.

Please read Tracy White’s How I Made It to Eighteen. Hurry!  She’s going to put a new one out soon, and you don’t want to be behind!

Tracy White’s female characters are all straight-hipped, regular women, too.  They’re cunning and honest and also more-or-less the opposite of the traditional superhero comics woman characters.  They’re neurotic and crazy and based on real people.

Too, her female characters are wounded by the popularized perception that women are particular things and do particular things.  They are people who live within the gender construct, but who don’t fit perfectly.

Finally, ‘yuumei‘s drawings are beautiful, and women are beautiful in them, but they are not sexualized.  Her comic, “1,000 Words,” made me weep.

She made this sculpture  called “Keep Me Broken,” that looks to me like fear of the horror and indignity of childbirth and motherhood.  Wait.  She’s a girl.  She can’t think that.

All women want to be mothers.  Even if they don’t know it yet, right?  Right?

<— Just read this.  What a phenomenal book.  Writing interview questions for this guy, and his wife Sari Wilson.

A.D. is a great story.  The folks in it are as palpable as the best-written literary characters I’ve loved. I’m thinking specifically of Harry Crews’s Hickum Looney, and the wickedly quirky cast of Richard Russo’s Straight Man.  And while I love the movie I get to see in my head when I’m only reading text, the way graphic texts make faces and bodies and settings more accessible frees up some of my thinker.  Makes me ask questions I ask when watching movies or television, like why that color, or that angle or that outfit?

One of the most exciting things about some of the voices who’re coming to this con, like Maureen Bakis and Michael Gianfrancesco, who organized NECAC, and Williamsport’s own John Weaver, is that they’re going to talk about visual literacy, which is a concept that’s gaining traction in education and the study of literacy with the increased availability of visual media via the internet, and the constantly expanding market of graphic books: comics and graphic novels.

It’s going to be wonderful.  I have nothing more nuanced for you now because my head is so full with all of this.  The next few weeks will be for processing and writing it out.  This is part of that, but it’s also to make you aware of how awesome thing thing is going to be.  Maybe to entice you to show up.

Last time, I explained my relationship with geek lore & comics in general.  Part of that wrong-headed relationship with graphic texts was that I have not been adequately aware of books like Stitches, Cuba: My Revolution, How I Made It To Eighteen, AD: New Orleans After Deluge, etc.  These, and books like them are gaining visibility. The truth is, the super-hero stuff is still not really in my aesthetic.  But one of the points of this con is that there’s something for everyone.

John Meier, who is responsible for founding the Lynd Ward Graphic Novel prize, and who is involved in concerns about graphic texts for libraries, told me about comics that are made to describe and explain advanced concepts in mathematics and science that are suitable for post-graduate academics. 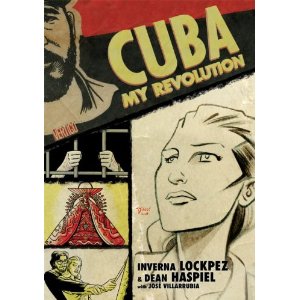 Which Dean Haspiel drew, Inverna Lockpez wrote, and Joan Hilty edited.  This book was so affecting that I had nightmares.

It is powerful in an ideology-changing way.  It asks you to reckon out your notions of patriotism, creates a world that is utterly unfamiliar, but cripplingly vivid. It is a timely warning about political rhetoric.  And if you’re me, it gells some stuff about history for you that you only had a kind of fuzzy grasp on from  your somewhat shoddy public school education, and your mostly missing post-secondary study of history outside of literature, Britain, and after, say, 1920.

Got to get friendly with some of MK Reed’s work, Joan Hilty’s feminist comic, and Tracy White’s graphic novel, How I Made It To Eighteen, image below.

And after my love relationship almost ended over this blog post by Dr. NerdLove, it’s great to know about some influential female voices in the world of comics and other traditionally male geek media.

One of the panels I’m looking forward to the most is one that disucsses representations of race, gender, and sexuality in comics with Joan Hilty and Alex Simmons.

What I’m saying is that if you’re expecting to see a whole lotta cosplay and a whole lotta storm troopers at the Wildcat Comic Con, you probably will get some of those things.  But you’ll also get to see and talk to creators in a totally non-commercial/non-industry sort of way.

You’ll get to think about new stuff and you’ll leave there with a list of stuff to read as long as your arm, with an arsenal of new vocabulary with which to discuss it.

You’ll get your brain stretched and your your creativity muscles tickled, and you’ll get to hear some really interesting, influential people talk.

Watch for articles in the Williamsport Sun-Gazette, in Sunbury’s Daily Item, and in the Webb Weekly.

And to register for the con, or to check out the roster of presenters, go here.

Just found this while researching an interview for later tonight.  Editors, Writers, Publishing types (freelance & otherwise), must read it.