So I’m keeping it short this morning so I can have breakfast and a pot of coffee in time to register & get my but and my spy pen in seat so as to hear all the groovy stuff I want to hear. Conveniently, it’s all in the same room, and the stuff I’m most intensely interested in is happening this morning, which is also lucky since I’ve got to interview a musician at 3:30.

Thanks for joining me on this voyage of Geekery, and look for more to come ’till next year’s Wildcat Comic Con.

Here’s a really funny picture that none of the news outlets who ran stories were interested in, and I think it is appropriate to introduce you all to Shableski, the guy who organized (with boundless energy and unbelievable connections) this event & has been my tutor in geekery insofar as lending me books and getting me moving in a direction.

As I interviewed the presenters, I heard a whole bunch of really great Shableski stories.  I’m looking forward to seeing some first hand.

And of course, next week, I’ll weigh in on the good stuff I learned at the Con, and tell you all about Zombie Train, which I’m hoping to talk Fella into attending tonight.  Tomorrow is my stuff (the panel I’m moderating & my presentation).

The thing that got me intrigued by this Comic Con in the first place–and the thing that got me to pull my head out of my ass and realize that the project is revolutionary, and it just happens to be coming alive in this relatively small, conservative town in which I live–was when John Shableski (the guy who’s in charge of WCC, and who has boundless drive, energy, and knows everybody who’s somehow touching the comics industry) sent me the preliminary schedule for the con when we were first discussing my involvement.

I expected a smallish program full of mostly local people talking about how much they love comics and wish Stan Lee was coming to Williamsport.

That assumption kind of touches on my prior ignorance of all things Comic, and in some ways, I feel I got a new brain through all of this: one with a better understanding of what comics have become, and why they’re important.  Yes, important.  Like canonical literature important, my literary friends.

But the program in one of its earliest iterations was equal parts comics and scholarship.  There was everything from people talking about comics they wrote or drew to panels discussing social concerns, circulation, and very few local people.

And the thing that continues to impress me about the scope of Shableski’s vision is that he is drawing attention to connections between comics and text, comics and film, and comics and video games that are not blatant.

As someone who has only lived in Williamsport a short time, I can say this, probably not without some backlash (steels self against comments):

There’s a general antagonism toward outsiders here.  Williamsport is a town that would rather celebrate local talent than acknowledge that–while we do have a disproportionate amount of it here–it could be complemented and edified by the big, bad, outside world.

This has made bringing the WCC to fruition a tricky task, and has required all of us who will take part to become proselytizers.

And the folks who are coming are as varied as the stories they tell, but they have two common characteristics: enthusiasm and vision.

I talked to two of the presenters this week, and I’m sharing tidbits from my conversations with them because they represent two very distinct pieces of this comics-as-new-media world.

Frank Beddor is author of a series of novels called Looking Glass Wars that became a series of graphic novels called Hatter M.  These are an alternative version of Lewis Carroll’s Victorian classic, Alice in Wonderland.  And though I’ve only read Hatter M of the graphic novel series, I can tell you with certitude that the stories are dark and engaging and thoroughly imagined.

Here’s a clip from our phone interview:

Michael Mendheim is a video game producer who has been working in the video games industry since the 80s.

He says his favorite ever was this one:

And here is a tiny excerpt of our interview:

Me:  Has doing a graphic novel always been your dream?  If it has, how did you wind up finally doing one.

Michael Mendheim: Yes, I’ve always loved comics and thought the Four Horsemen concept would be perfect for a graphic novel. The Four Horsemen video game was in development with a small team at the 3DO Company. We were developing the game and a comicbook series (which Simon Bisley was illustrating).

3DO endured financial hardship when the tech bubble burst and they filed for bankruptcy. Rather than let the property die, I purchased it out of bankruptcy – it took about 18 months for the property to clear but once it did, I owned it free and clear and immediately  called Simon Bisley and told him we were getting the band back together.

Once Again, you really shouldn’t miss this thing, even if you have only a cursory interest in comics, or if you’re a teacher, or if you like books, or if you just like to listen to cool and/or smart people talk about stuff they’re into.

Sometimes, I like to concern myself with philosophical questions like “What is beauty?” And lately, I’ve been thinking a lot about literature, specifically literary fiction, and asking the ether, “what counts as literature?  What are the standards?  Should there be standards?  If there are standards, who should be in charge of them?”

It is clearer every day that the time-honored model of the academy as bastion of literature and high art doesn’t jive with new media.  The academy itself is dabbling in new media with online courses and virtual text books, Facebook pages & marketing departments who tweet… We’re in a state of cultural reckoning right now.  It’s exciting and confusing and wonderful.

If we want high art–or really any standards at all–we’re going to have to figure out how to let the academy, the canon, and new media work together, or at least integrate into one another to some extent.

Graphic novels are totally old news.  I was kind of peripherally exposed to The Sandman around 7 years ago, and I’ve been paying a bit of attention, so I know that graphic novels have been adapted to film somewhat frequently lately, as in The Watchmen and V for Vendetta and others.

And really,  they’re not typically in my taste.  It’s not that I can’t see the beauty, or recognize the value, but like with video games: try as I might, I just can’t make my stubborn, realist self be so in love with the fantasy. I find the writing to be generally poorly done, or overdone, even–or especially–when the art is fabulous.  I do love particularly fanciful children’s books.  But really excellent children’s books hit that sweet spot of beautiful writing and beautiful art.  It seems wasteful or disrespectful to me to make gorgeous images and attach them to poor writing.

Comic book movies are old news, too.  Batman, Superman, The Fantastic Four, The Hulk, Spiderman, all began as comic books, whose cousins, graphic novels, are appearing with greater gusto and in a wider array of disciplines and applications all the time. Less famously–and more in my aesthetic–American Splendor explored the “real” world in comics as told by Harvey Pekar.

But I’m trying.  Really trying.  Trying so hard that I’ve agreed to present at the Wildcat Comic Con on character development in writing (specifically, that it is important to know and love one’s villains), and to moderate a panel on Zombies.  I do enjoy The Walking Dead, the show & books, those graphic novels are entertaining.  I’ve read chapters of The Zombie Survival Guide here and there, and I find voodoo zombies to be particularly fascinating.

Stitches is realism, a proper memoir that is at turns tragic and funny and strange. 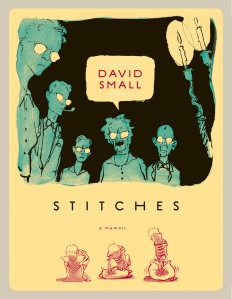 David Small is a well-known, award-winning, beloved illustrator.  His illustrations have adorned children’s books and magazines for decades.

In 2009, he released this work, and I will tell you openly that this is one of the most literary things I have read in a long time.  I would have laughed at you if you’d told me several weeks ago that I would think of a book with fewer than a thousand words as high literature.

The book works like a prose poem.  It tells a vivid and affecting story with carefully chosen words and often eyeless, expressive figures, leading the reader to certain conclusions without doing any of the work for her.  The writing is spare, beautiful.

Here’s a taste: My step-grandfather, Papa John, came home from work.  Papa John had a scratchy face.  He wore a watch and chain.  He was the “greeter” at a funeral home.  He took me to see the trains come in.  Papa John knew everyone in town.  He knew all the “boys” at the bar.  And on chilly mornings, he stoked the furnace.

“What do you put in there?”

“Do you put little children in there sometimes?”

In this scene, it’s clear that young David feels unsafe at his grandparents’ house, but free to ask his step-grandfather–who is one of the nicest adults in the book–questions that indicate that fear.  Small, drawn clues to the narrative signal us to slowing action with greater detail,  lead us to questions and conclusions, as in the facial expressions showing subtle intention, so you get the right read on each character.

I don’t want to tell you too much.  I want you to go get this book and read it.