It’s so rare that I watch two recent movies in the same week.

Due to my self-inflicted (for a large part) media deprivation as a young person, I spend a lot of time playing catch up on movies and TV that other people have already seen.

We went to see The Thing.

Then we watched Septien on Netflix at home. 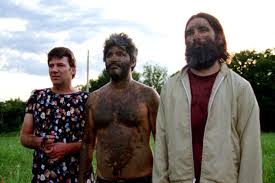 Of these two films, I say: Too Much!  And Not Enough!  and Sadly Unmemorable! (less so Septien).

Truth of previously confessed media deprivation: I have not seen The Thing  from 1982.

My movie-going companion assures me that The Thing from 1982 is a lot more psychological thriller type than The Thing from 2011.  I believe that.  The Thing from 2011 is a bunch of really cool special effects in circumstances that seemed to be mostly implausible.  Like: Why the heck to scientists have flame throwers?  And why would people who have PhDs do something as stupid as shoot a flamethrower inside a structure that is the only shelter in sub-arctic temperatures?  So too much wham, and not enough slow, contemplative, scientist behavior or brilliant plans.

Septien, which my movie companion ungenerously called a wannabe Wes Anderson film, was too much with the contemplation from people who weren’t as good at it as The Thing’s Scientists should have been.  There was a lot of implied pederasty, and a lot of other uncalled-for pretension.  For example, one of the brothers was overtly homosexual, but closeted. Another of the brothers was maybe a little in love with the third, prodigal brother who was a gas-huffing hustler and returned from the presumed dead in the first frames of the film.  These were all conveyed with longing looks, and subtly- or not-so-subtly dropped clues, and tied up in a neat little package of suspected sexual abuse.   Also, a lot of penis and vagina art.  Like too much.  Cool looking stuff, looked a little like the sort of thing this schizophrenic used to make when I worked at a coffee shop in New Haven.  But one movie only needs so much penis-dipped-in-shit.

So I really admire Wes Anderson’s work, and aside from the three brothers & kooky drawings thing, Septien wasn’t nearly so swell as any of the Wes Anderson stuff.

HOWEVER, I am pretty sure I did not hate it.  I also did not hate The Thing.  I’m pretty sure I liked Septien a ton more than The Thing.  Also, I got a little soft spot in me for the indie picture scene.  Even when they’re bad, at least they’re trying to do something other than mint cash into the pockets of highly paid actors/producers/directors.   I appreciate that.

Writing about whatever the f*ck I want. View all posts by April Line Writing

This blog is maintained by April Line, Hosted by Wordpress.com, and this here theme is one of the free ones.

Please contact me before using any of my work, or if you just want to pick my brain. AprilLineWriting@gmail.com. I like you cos you're reading this.